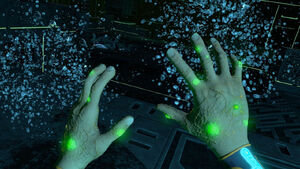 Subnautica
The Kharaa is a highly infectious bacteria that was brought to a research facility on Planet 4546B by the Architects, which forced them to put the planet under quarantine. The Kharaa had spread to the other Architect worlds by this point, and billions were dying.

The Architects attempted to brute force a cure, though they were unsuccessful for a number of reasons.

A strain of bacteria called Kharaa originated on an unknown planet. It was later discovered by the Precursors who unknowingly spread it to other planets. They set up multiple research posts to find a cure, one of them being 4546B. Once the bacterium got out, most of the planet's inhabitants were infected. They put the planet under quarantine to prevent the Kharaa from spreading outside the planet.

To do this, they created a gigantic structure that acted as a powerful weapon that would shoot down any spacecraft that went too close to the planet. They also genetically created a race of aquatic fauna that was immune to the Kharaa virus called Warpers, which would be set free into the oceans of 4546B and hunt down and kill any living creatures that were infected by the Kharaa.

Later, the Precursors discovered a massive creature on 4546B that had a bizarre immunity to the Kharaa called the Sea Emperor Leviathan. They captured the creature and experimented on it and it's young in an attempt to find a cure to the infectious bacteria. As time went on, the Precursors later disappeared, either because they evacuated the planet or died from the disease, and the Sea Emperor Leviathan was left in an experimentation facility for around one thousand years.

Later, an Alterra Corporation space ship called the Aurora was shot down by the Precursor weapons platform and crashed on the planet with all but one human being killed in the ship's destruction. The single surviving human (the character you play as) later became infected by the Kharaa bacterium while exploring the planet and discovering the various lifeforms inhabiting the planet and structures created by the Precursors.

After a cargo ship was destroyed trying to land on 4546B to perform a rescue operation, the human tasked itself with shutting down the Precursor gun, which was set to not disable if the sapient being shutting down the gun was infected. Later, the human discovered the disease research facility the Sea Emperor Leviathan, whom the human learned was immune to the virus, and set it's young free by following the instructions of the Sea Emperor Leviathan telepathically.

The infant Sea Emperor Leviathans would produce the cure to the Kharaa called Enzyme 42 and would spread the enzyme when set free to the oceans of 4546B, ultimately killing the Kharaa and curing all lifeforms. The Sea Emperor Leviathan ultimately died fulfilling its charge of keeping its species alive and eradicating the Kharaa. The human later disabled the Quarantine Enforcement Platform and escaped the planet in a rocket that they built. The human contacted the Alterra Corporation via the nearest signal relay, and so the corporation became aware of the events on the planet.

The Alterra Corporation quickly sent a series of vessels to construct a station in orbit of the planet. Their main goal was to excavate a massive leviathan class entity trapped in the ice polar ice caps, and retrieve an ancient undamaged sample of the Kharaa Bacterium.

Later on, the Kharaa manages to mutate, and becomes a virulent plague in human space, during the Natural Selection game series. It is unknown if Alterra is the cause of this, though their name and logo appears in infected structures frequently. The Kharaa was present on countless other worlds of the Architects, so it is likely that it spread from there.

After two weeks of incubation in whatever organism it infects, the Kharaa spend another five weeks attacking the body by shutting down the immune systems of their hosts, which makes the host more susceptible to other diseases, and genetically mutate their DNA with the creation of various bio-luminescent cysts on the skin. The body of the host would eventually shut down or die due to its inability to function after the symptoms.

Add a photo to this gallery
Retrieved from "https://aliens.fandom.com/wiki/Kharaa?oldid=203728"
Community content is available under CC-BY-SA unless otherwise noted.