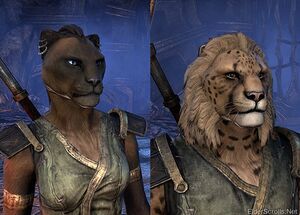 Bipedal or Quadrupedal depending on sub-race.

The Khajiit are a race of felines who hail from Elsweyr. They are normally regarded by the other races as untrustworthy and as nothing more than common thieves. They recognize themselves in the third person when speaking.

Prior to their relationship with Imperials and other races of man, they had few, if any, permanent cities. Even now, their city's are know to move. However, this influence is only felt in the southern regions of Elsweyr. Most of their export revolves around moon-sugar, the main ingredient in Skooma, a addictive drug.

The Khajiit hold the twin moons of Nirn in high regard, and say that their appearance and physiology depend on the phases of the moons. They believe the larger of the two moons affects size and if they are quadrupedal or bipedal. The smaller moon effects how bestial their appearance will be.

Their religious pantheon bears similarity to that of men, but contains subtle yet notable differences.

It is unknown if Khajiit are related to the Ka Po' Tun cat people of Akavir.
Retrieved from "https://aliens.fandom.com/wiki/Khajiit?oldid=181093"
Community content is available under CC-BY-SA unless otherwise noted.