Michael Reisz ("Kevin 11")
Charlie Schlatter (Original Series)
Greg Cipes (Alien Force onwards)
Nathan Keyes (Alien Swarm)
Kevin Ethan Levin (otherwise known as Kevin 11) is either an Osmosian or an ordinary Human. He is commonly portrayed as either an enemy or an ally to Ben Tennyson.

Kevin's physical appearance has changed from a 11 year old to a 17 year old. However, he retains some recurring characteristics, such as shoulder-length black hair, somewhat pale skin, and dark brown eyes.

Prior to moving out of Bellwood, Kevin's prominent outfit consisted of a black shirt, a long sleeved grey shirt, and blue holsters. He also wore a padlock necklace similar to the one he wore when he was younger, but marked with an "11". During his sequent visits, Kevin gains a few chin whiskers, some stripes on his gray shirt, and a cross-shaped scar on his chin.

As "Pyronite Kevin", Kevin's left arm and lower body remained unaltered whereas his upper right chest, head, and right arm was changed to that of a Pyronite.

Kevin's first major mutation, dubbed "Kevin 11", mostly resembled a Tetramand, but with reddish-pink skin, a Pyronite-like upper left arm, a Petrosapien-like upper right arm, and Vulpimancer-like lower arms. He had Lepidopterran wings, a Kineceleran tail, an Ectonurite eye track on his chest, and an upper back resembling a Galvanic Mechamorph. His head consisted of Kevin's hair and ears, two left eyes similar to those of a Tetramand, a Galvan-like right eye, and the lure, teeth, and gills of a Piscciss Volann. He originally wore cargo pants but switched into jeans prior to meeting Kwarrel.[1]

12-year-old Kevin's mutation was similar to, yet different from Kevin 11. His face retained Kevin's structure and hair, but had skin colored in two different tones of green, a Loboan-like right eye, an Opticoid-like left eye, a Gourmand- like mouth, and a head fin and eyes on his chin similar to that of a To'kustar. His body mostly resembled an Arburian Pelarota's, but with a Polar Manzardill's back and fins, a Splixson's lower chest and sensory nodes, Thep Khufan bandages, and Transylian shoulders. His arms had lower parts resembling an Arburian Pelarota's and upper parts resembling a Transylian's with red Opticoid eyes, small spikes, and fingers resembling Florauna tentacles. He also had Splixson legs, Florauna eggplant bombs, and a large Gourmand tail. He wore Kevin's pants and a Thep Khufan crown.

As Ultimate Kevin, his composition was more complex than his earlier mutations from his youth. His face mostly resembled an Aerophibian's, but with Kevin's hair, a patch around the right eye colored like a Methanosian, a right eyebrow resembling a Vaxasaurian, and a jaw similar to that of an Evolved Arachnichimp but with an interior resembling that of a Sonorosian. His torso resembled a Vaxasaurian's, but the backside was colored like an Aerophibian and had a set of Necrofriggian wings. His right arm mostly resembled a Petrosapien's, but with two Crystalsapien crystal spikes on the shoulder and a Biot-savartian-like claw. His left arm mostly resembled a Methanosian's, but with a Biovosortian spike on the shoulder and Appoplexian-like claws. He had an Aerophibian-like right foot and an Appoplexian-like left foot. He also had a Vaxasaurian tail, two Cerebrocrustacean legs in place of a secondary left arm, a secondary right arm resembling an Arachnichimp's, and Orishan water ports.

In the Prime Timeline, Kevin is an Osmosian capable of absorbing energy, matter, and DNA. His powers were believed to be either an unexplained mutation or alien heritage, but this later explained to be of a unique genetic component.

Kevin has the ability to absorb the energy and matter of anything (excluding certain materials) through his body at will and utilize it in various ways. If he is not absorbing excessive amounts of matter or biology directly into his body, he becomes wrapped in a coating that leaves his clothes intact. However, if he is wearing a Plumber Suit, the suit will not remain intact.

Kevin as undergone multiple mutations, most of which involved using his powers on the Omnitrix. Each Omnitrix-related mutation results in Kevin temporarily gaining the natural abilities of each species present.

In an alternate timeline, Kevin is an ordinary human equipped with a replica of the Omnitrix called the Antitrix that he generally uses to fight Ben out of pride and jealousy. Similar to the Prime Timeline Kevin's mutations, the Antitrix aliens are "cross-contaminated" hybrids.[2]

If Kevin were to fight Ben 23, Quad Smack would be stronger and powerful than Handy Man based on his alterations to the Antitrix.

While Kevin can absorb all sorts of compatible matter, he cannot take too much of it. Such as with the Omnitrix, where he became mentally unstable and lost all accounts of control from all the DNA given to him. However, Kevin has recently overcome this weakness by mastering his powers.

12-year-old Mutant Kevin can be incapacitated by quills fired by Argit's Species.

Ultimate Kevin was sensitive to high-pitched noises, such as those produced by an Evolved Sonorosian.

When Kevin first appeared, he quickly became one of Ben Tennyson's most notable enemies, though he reformed by age 16. 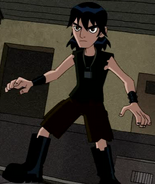 11-year-old Kevin as seen in the original series

17-year-old Kevin as seen in "The More Things Change: Part 1" 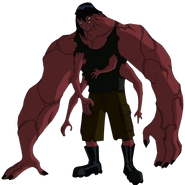 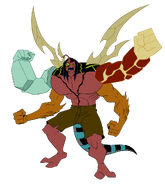 Kevin 11 as seen in the original series 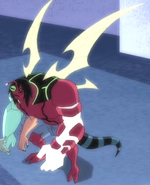 Kevin 11 as seen in Ultimate Alien 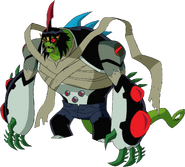 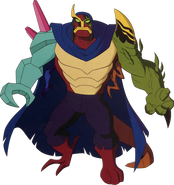 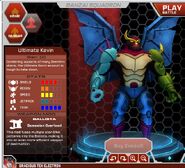 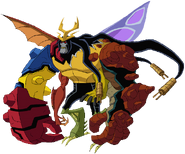