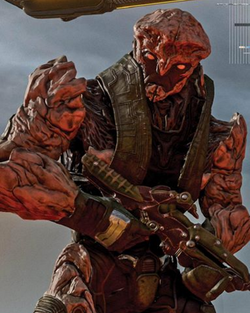 Mass Effect Universe
The Kett are a warlike race originating from the Andromeda Galaxy in Mass Effect: Andromeda.

The Kett are humanoids, with a skeletal-like structure, with a bone collar that protects the back of the neck. The Kett are an unusual race, in which they require other races to reproduce and spread their genes. Through a process called exaltation, using some kind of advanced form of biotechnology, they assimilate other races, injecting them with a black mutagen material, turning them into kett.

Very little is known about the kett, but it appears they are organized in as a militaristic culture. They are highly xenophobic of other races, seeing them as inferiors, ironically the very races which they enslave and conquer are necessary to increase their numbers. Exaltation is a central part of their culture, believing it is the mission of the kett to bring them to greatness by making them into one of them. According to the angara, the kett do not have a defined economy, though they bring gifts and make bargains.

While they are a xenophobic species, strangely the kett rather than commit conventional research prefer to improve their technology incrementally by taking features and designs from other species' technology.

Retrieved from "https://aliens.fandom.com/wiki/Kett?oldid=172693"
Community content is available under CC-BY-SA unless otherwise noted.