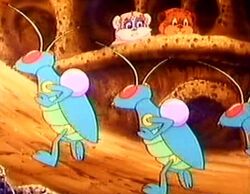 Star Wars
Ketes are large, insectoid creatures indigenous to the forest moon of Endor. They live in huge hives and are ruled over by a queen.

They have red eyes, pincer-like hands and feet, and a pair of long thin antennae. Queens have four arms and legs, while workers have only two.

They are most well-known for producing a substance called Kete nectar, which they transport within spherical containers known as "nectar pearls".

Kete nests are huge tower-shaped structures surrounded by a moat of sticky liquid to prevent intruders from trespassing. The nest's entrance is located way above ground-level, and the external walls are smooth enough to make it very difficult for creatures other than the Ketes themselves to climb them.