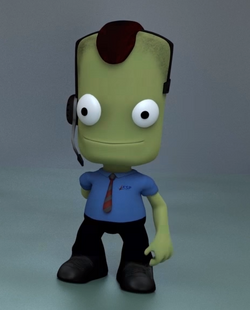 Kerbals are a species of short, green-skinned aliens from the planet Kerbin, the third planet from its sun, Kerbol. They stand at around 71.2 centimeters (4'2"), and have an enormously tall head, taking up an estimated 1/3 of their total body mass. Kerbals, as their culture suggests, are obsessed with space, rockets, and traveling into the unknown. They will often partake in long, arduous space travels to other planets in the Kerbol System.

Kerbals have a skin color of any shade of green. They also appear to have hair growth explicitly on the head. Because of their short legs, they are slow walkers and runners.

Kerbals seem to be able to survive enormous amounts of time on very little food or water. They can also go for years living in confined spaces, which is very beneficial to their exploration of space.

Kerbals are very resilient in nature, capable of surviving and walking away from impacts that would kill many other species. They also have an inherent 'bounciness' as they tend to go limp and bounce off the ground when falling from a height before going on their way. They do not seem to be affected by radiation either, sometimes standing un-shielded next to nuclear exhaust and showing no adverse effects.

The Kerbal species developed in around 50,000 years, and their culture in only around 5000, this is an incredibly short amount of time for a race to evolve. Their awkward walking style is attributed to their short legs and recent bipedal status, as it's suspected they only became a bipedal species in the last 100,000 years. In the year 627 BEA, a famous Kerbal astronomer, Kerbileio Kerman, discovered and named the other 6 planets two of which are dwarf planets Dres like Ceres in the main asteriod belt between Duna and Jool and Eeloo a dwarf planet on the other side of Jool the 5th planet from its sun Kerbol as well as the 4 other planets in the local solar system Moho, Eve, Duna and Jool, and their moons for a total of 16 known worlds as of the time of Kerbileio Kerman. This is commonly agreed to be the start of Kerablkinds obsessive space-culture.

They got on the Mun, the biggest moon of Kerbin, just in 1 AEA. This is considered to be the most exciting part of Kerbal history: Jebediah Kerman, also known as The Great Kerbal, stayed an entire day alone in a little capsule while travelling to the Mun. His ship exploded on landing. Only the command pod survived, and he waited for the rescue mission, which also exploded on landing on the other side of Mun, and Bill Kerman also got stuck there. The last, and successful, rescue mission was sent 2 days later. The ship successfully landed on Mun, picked up Jeb and returned to Kerbin, while another rescue mission was picking up Bill.

Retrieved from "https://aliens.fandom.com/wiki/Kerbal?oldid=182262"
Community content is available under CC-BY-SA unless otherwise noted.