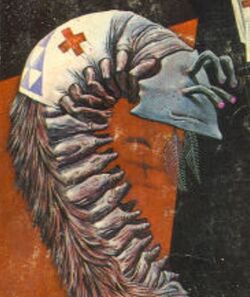 Combination of vocal and body language

James White
Kelgians (physiological classification DBLF) are a sapient, furry, caterpillar-like alien species native to the planet Kelgia and one of the several known members of the Galactic Federation. Despite their appearance, Kelgians are physiologically very similar to Earth Humans (classification DBDG) and require similar environmental conditions.

Kelgians are warm-blooded, oxygen-breathing herbivores and bear a more than passing resemblance to an oversized caterpillar with a beautiful silvery fur covering. They walk by undulating their bodies over their several pairs of short legs. The head is conical in shape and the forelimbs end in three manipulating digits.

Kelgians are best known for their complex, involuntary body language. They have four extendable eyestalks, a pair of hearing antennae and a highly variable fur coating; all of which respond in such a subtle and uncontrollable manner to their emotional state that they could almost be considered telepaths among themselves, broadcasting their thoughts unintentionally via body language. As such, Kelgians completely lack concepts of lying, diplomacy or tact. They will always say what they think, for good or for bad.

Kelgians have no skeletal tissue other than a thin and fragile case protecting the brain. Instead, their vital organs are enclosed by a hollow muscular envelope which also allows them to move about, in their typical undulating gait. Their circulatory system is extremely complex, including a net of blood vessels running just below the skin, to provide oxygen for the outer musculature. As a result, Kelgians are particularly vulnerable to cuts. Wounds that would be considered superficial by other species are often lethal to them. To make matters worse, their fur will never recover after being damaged; leaving the wounded individual both physically and socially impaired due to the fur movement's important role in aiding communication. Kelgian blood is red, indicating that haemoglobin is present; and their blood pressure is higher than in Humans. They are herbivorous, dioecious and monogamous; and their overall philosophy and temperament are not too dissimilar from Humans.

The Kelgian language mostly consists of loud, foghorn-like hoots. Their voice is not physically able to produce variable speech tones, which is probably the main reason for which they evolved a sophisticated body language to express emotions.

Retrieved from "https://aliens.fandom.com/wiki/Kelgian?oldid=184890"
Community content is available under CC-BY-SA unless otherwise noted.