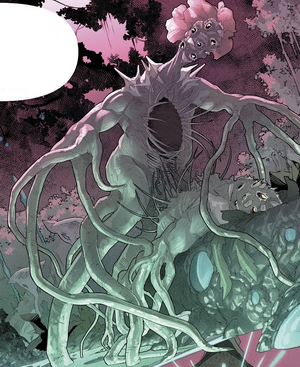 DC
The keh-Topli are a Trilogy species from the City of Enduring.

Humanoid carnivorous plants based on specific families of plants.

The keh-Topli evolved to prefer other thinkings beings as food. Before contact was made with other worlds they ate each other. When they made contact with the Nah they began eating them too. After their worlds were destroyed by an alien invasion they helped form the Trilogy with the Nah and @At.

keh-Topli possess surnames but are not any indication of family ties but are used for the comfort of interacting with aliens.

The keh-Topli were once a species that believed themselves to be the only species in the universe. When firs contact was made with other races, there were misunderstandings. In some cases the keh-Topli forgot other intelligent species were not for eating. Though in the past they were predatory creatures and efficient killers, in current times they seem to be more mellow and civilized. However they still feel the emptiness inside and the lack of prey within them unsatisfying. It's a spiritual connection. When a keh-Topli says "You smell delicious", it means respect.

Retrieved from "https://aliens.fandom.com/wiki/Keh-Topli?oldid=172985"
Community content is available under CC-BY-SA unless otherwise noted.