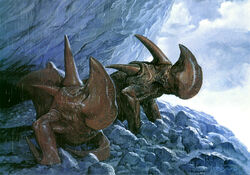 Keeled Sliders are large brown-hued faunal organisms indigenous to the muddy mountains of Darwin IV. They rest upon kneeled arms, which they use to help them slide down muddy banks in their home environment. They are similar to other common stream organism in term of sexual reproduction, likely possessing just two genders, and possess special egg chambers to keep both the eggs and the young safe from harm.

The keeled slider might be related to the groveback as both species walk on two front limbs and balances using a single rudder-like limb near the end of the creature's body. However this hypothesis is never confirmed in the discovery documentary or the book and is left open to speculation.