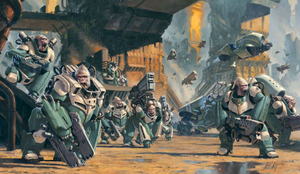 The Karmans are a sapient species of intelligent simians.

The forerunner species of the Karmans, the Gorilla beringei of Sol III, had disappeared many thousands of years before, but its genetic code had been saved in the EMI grid. As part of one of their plans, the Therians gave birth to the Karmans based on this species. With subtle alterations to their genome, the Karmans were taller, stronger and were able to develop into an advanced civilization.

The Karmans call the birth of their species the Elevation, when the Therians created them to develop a suitable species that would assist the the Hyperlife Project. The Therians encouraged their creations to develop into an industrial society that would eventually weaken their world's environment to be suitable for theriazation. However the Karmans though grateful for their creators parts in giving life to their species, deviated and centered the technology and civilization on environmental and self-sustainable technologies.

In less than a thousand years the Karmans grew from a primitive race to spacefaring race. At the space age the Karmans, knowing full well of the dark intentions of their creators, created Libra to administer the fate of their own species. Libra staged a civil war to promote aggression and fool the Therians in believing that their creations' path were going according to plan and thus sparing their species from extinction. After the war on Karma ended, their society was filled with an excess amount of warriors without purpose. The Therians called on the aid of their children after they were losing wars on two fronts against the Cogs and the Krygans.

The Karmans experienced in the art of war managed to stalemate the Cogs through guerrilla tactics. Eventually C-Nap Line negotiated a peace treaty that the other three Cog Lines grudging accepted. The War with the Krygans, however, became their greatest shame when they drove the Krygans back to their homeworld, and rendered them extinct on the Therians orders.

Karman society split into another faction known as Nova that was dedicated to preserving other species as a way to atone for their genocide. Flux, a more survivalist faction of warriors was born from Libra to prepare for a war that may come in which they would have to fight against their creators for freedom.

Retrieved from "https://aliens.fandom.com/wiki/Karman?oldid=161420"
Community content is available under CC-BY-SA unless otherwise noted.