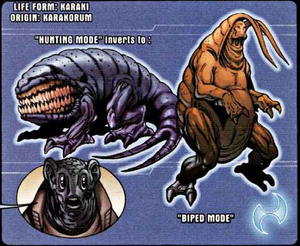 The Karaki are a savage sentient race native to the planet Karakorum in the Negation Universe of CrossGen Comics.

The Karaki are shapeshifters and have two distinct forms. The first is a harmless, roughly humanoid form, which they adopt to question their victims in a more civilized environment, where the victim will be relaxed. The second form, is used when hunting. It is a large quadruped, whose tooth filled mouth extends halfway around it. This hunting form can extend a stinger which contains a powerful sedative, and allows them to absorb memories and images from the victim’s mind.

The Karaki lead a double life. In their village they look like kindly bipeds, but in the field they change to more bestial forms. When an unsuspecting alien would land on their world, they would initially hunt their new prey, stinging them unconscious and getting an idea of their home planet.

The victims would then wake up in their village, where the apparently hospitable humanoids would gain their trust, and question them to fill in their knowledge.

Once they possess the knowledge the require about the being's planet, they decide whether or not to invade. They almost always decide to do so, and so would turn on their victim. Somehow are able to make flesh and bone as malleable as taffy, which they then stretch and reshape into the shape of a big arch, within which they are able to create a warp portal leading to the victim’s homeworld. The victim is still alive through this process.

All of the Karaki then go through the portal, breeding exponentially and consuming specifically every member of the victim’s species. When the victim’s species is extinct, they turn on each other until there’s exactly as many left as first came across, who then all return home bringing a memento of their genocide. So far they have attacked about 74 planets.

Retrieved from "https://aliens.fandom.com/wiki/Karaki?oldid=172983"
Community content is available under CC-BY-SA unless otherwise noted.