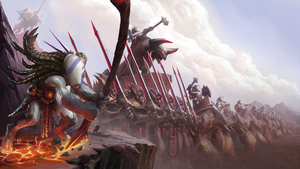 The Kapaku originally dwelled on a volcanic planet that was engulfed in fire and ash, until the Sowers invaded and terraformed their world. Though their world was destroyed the surviving Kapaku were transplanted on Auriga.

The Kapaku are described as a species of tiny inventors and tinkerers that rely on powerful golems to handle their workloads.

Retrieved from "https://aliens.fandom.com/wiki/Kapaku?oldid=172691"
Community content is available under CC-BY-SA unless otherwise noted.