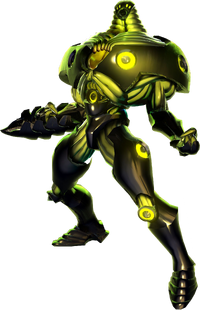 Metroid
Kanden is a dangerous molecular experiment that went wrong on the Enoema Homeworld. The crazy scientist that developed his bio-structure, used several defense and characteristic cells from the most dangerous and destructive predatory insects. Kanden is surrounded by an electro-magnetic field, which has voltage potential to that found in lightning storms.

Kanden, whilst in the lab, took an un-tested heavy-duty weapon, the Volt Driver. This machine can create a charged blast that can overload the combat or scanning visors of Galactic Federation military suits.

Kanden's alt-from is the Stinglarva. This large speedy caterpillar-like insect has a small, but long regenerating tail, that homes in on its prey before it explodes. This explosion can cause Kanden's alt-form to jump.

Not a lot at this current moment is known about the Enoema race.