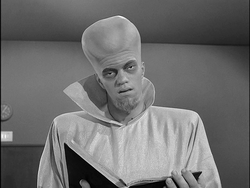 The Kanamits are sapient humanoids which claim to originate on a planet far beyond the galaxy and came to Earth to gain Humanity's trust, only to annex Earth and abduct Humans to be used as food. They communicate by telepathy and have mastery over advanced technology, including highly efficient energy sources and the creation of force fields.

The Kanamits are tall humanoids, standing at a little over 2.7 meters, and weigh about 158 kilograms. They have oversized, rounded, bald craniums, housing larger and more complex brains. While they have a humanoid mouth, which often hangs open, they do not utter any sounds from their mouths, possibly lacking vocal cords, instead utilizing a telepathic form of communication. Kanamit mouths appear to exist for the sole purpose of consuming food, although they can move to make expressions. They are also known to be able to grow facial hair, and have dark circles around their eyes, along with commonly appearing to have a perpetually tired expression. Their biology is similar enough to Humans for Human lie detector machines to get accurate readings from them. It is very likely that they are entirely carnivorous, completely incapable of digesting plant matter.

The Kanamits, for unknown reasons, seek to eat the meat of other sapient beings, such as Humans. To achieve this, they will approach other species in a peaceful manner, grant them technology that will supposedly create planetary peace while claiming that they only want to bring peace to the species, and then use the trust they build to allow members of the other species to travel to their homeworld, only to kill them and use their bodies for food, while also sending members of their own species to the targeted planets. Given that the Kanamits essentially annex and colonize worlds, this could be a deeply engrained method of expressing dominance over the annexed beings, likely with an extensive historical and possibly religious context. Along with the fact that the Kanamits seemingly do not use their own farmland-creating technology, this supports the possibility that the Kanamits are completely incapable of digesting plants, only able to eat meat. Any use for the annexed beings beyond food is unknown, possibly including an enslaved workforce. Messages supposedly sent by Humans who visited the Kanamit homeworld claim that it is a paradise, and that the Kanamits have a sport very similar to baseball, but given the nature of the Human extraditions, it is unknown if these claims are true. Kanamits are known to wear shimmering cloaks with high collars, which was said in another one of the supposed Human messages, implying some truth to the messages. Their language, while presumably holding some parallels to English, is rather difficult to translate, and thus, the Kanamits purposely leave their cookbooks with targeted species, knowing that they would not be able to decipher them in time, with the action of leaving the book behind implying that they are not hiding any ulterior motives. They do not appear to have weapons, likely due to their technology being able to negate even very powerful weaponry, and claim to have achieved peace on their homeworld.

The Kanamits have highly advanced technologies, traveling in flying saucer-shaped spacecraft capable of crossing vast distances of space between their homeworld and Earth in only a few months. They have powerful atomic generators capable of powering large areas for only a few dollars, nitrate fertilizers capable of turning deserts into fertile farmland, and forcefields that could render nuclear weapons completely ineffective.

The Kanamits targeted Earth as a planet to annex, landing while the planet was facing various international crises. One of their representatives met with the United Nations, claiming that the Kanamits only wished to serve man, but phrased it as an intent to help. Passing a lie detector test, the Kanamits are trusted, and begin giving advanced technologies to Humans, ending power and food crises and creating world peace. At the same time, the Kanamit cookbook, which was left behind as a tactic of establishing trust, was picked up by US government cryptographers, who tried to decipher it. As their department was being shut down in the wake of warfare becoming impossible, one cryptographer, named Patty, reveals the title of the book to be "To Serve Man." She keeps working as the head of the department, Chambers, retires.

Soon, Humans volunteer to go to the Kanamit homeworld, and for every ship full of Humans that leaves, more Kanamits arrive on Earth. Humans on Earth appear to be receiving messages from friends and family who went to the Kanamit homeworld, but unbeknownst to them, the Kanamits were killing and eating all Humans who went aboard their ships. Chambers signs up to go to the Kanamit homeworld as well, but before he boards the ship, Patty, who deciphered the rest of the book, tries to reach him, declaring to the Humans present at the ship that the book was actually a cookbook. Chambers tries to run, but a Kanamit pushes him into the ship, taking him into space, where he is locked in a cell. He is routinely given food as to keep him at a healthy weight, and as he flies to his death, he recounts the origin of the events to no one in particular.