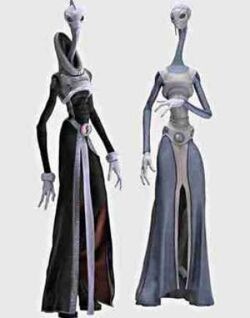 Star Wars
Kaminoans are a tall, long-necked race of humanoids native to the planet Kamino. Due to the fact that Kamino is completely covered with water and plagued by constant thunderstorms, the Kaminoans live in domed cities built on top of large, circular platforms built on stilts over the water. They are best known for their advanced knowledge and use of cloning and genetic engineering, and were responsible for the creation of the Clone Army for the Old Republic.

Early in their history, global warming caused Kamino's polar ice caps to melt, engulfing the entire planet's surface in water. To compensate, the Kaminoans built large, spired cities on top of metal struts, elevating them high above the water. They also developed cloning technology, allowing them to control the very gene pool of their population. Kaminoans have become the leading experts in these fields, and have offered their expertise to outsiders, the most notable of which was the creation of Galactic Republic's clone army.

Kaminoans are a tall and slender species of humanoids, with pale, white skin and long, thin necks, the latter of which is their most unique feature. Atop said necks, their small heads are dominated by large, black eyes, and possess slitted nostrils. It is inferred, based on these characteristics, that Kaminoans have evolved from aquatic species. They are genetically engineered to have an accelerated growth rate, already reaching their age of maturing at 11 standard years.

Kaminoans are also characterized with the ability to see colors in the ultraviolet spectrum that can't be seen by the human eye. As a result, humans and other species are only able to see the interior of their buildings as pure white, while through a Kaminoan's eyes their city is very colorful.