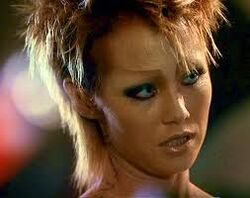 Farscape
Kalish are a race of humanoids which have been absorbed into the Scarran Imperium.

Similar in style to the Scarrans they have an ability to produce heat, which can be used as a weapon. While humanoid in shape some of them have the ability to transfer information from one Kalish to another by rolling back an eye and revealing some sort of organic information transfer system.

Another aspect to their physiology is that as a species they have evolved the ability to "shift" their center of gravity, enabling them to walk on walls or even ceilings. Additionally they are able to reattach their body parts even when they are severed from their bodies.

Little is known of their culture, as they are a race that has been conquered by the Scarrans and are now part of the Scarran Imperium.

Despite this many Kalish now serve in the Peacekeeper Corps (probably as it gives them the opportunity to fight Scarrans).