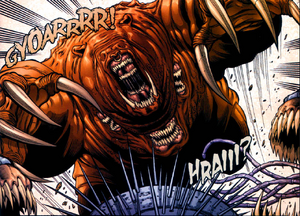 CrossGen
The Kaliman Retrievers were an species native to the planet Kalima in the Negation Universe. They were domesticated animals used by the Kalimans as pets.

The Kaliman Retrievers are a canine species that resemble Earth bulldogs with tusks and four mouths. They have fleshy but durable skin folds that cover their entire form. An adult Kaliman Retriever can grow to the size of an Earth bear. Adult Kaliman Retrievers can memorize over a thousand verbal commands. They "speak" to each other in a language of scents with basic grammar and syntax. Some are capable of reading written language. Like Earth canine, there appear to be several breeds, coming with a variety of pelt colours.

In order to escape the planet Karakorum, High Castellan Komptin and Obregon Kaine, manipulated the Karaki to hunt Komptin's pet Kaliman Retriever. Since it was a semi-sapient the Karaki were able to use the creature to create a portal to Kalima. After opening the portal, the Karaki began hunting the Kaliman Retrievers on the planet.

Soon after the Karaki were driven off by the Negation and planetary forces. However all homeworld Kaliman Retrievers were eaten, and the species quickly became endangered, with only a few that survived the genocide being offworld.

Retrieved from "https://aliens.fandom.com/wiki/Kaliman_Retriever?oldid=166161"
Community content is available under CC-BY-SA unless otherwise noted.