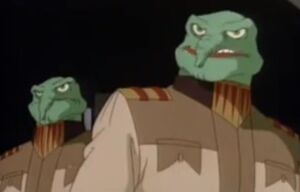 The Kalifadiks are a sapient alien species from the planet Kalifadik, known for their strict judicial system.

Kalifadiks are hairless humanoid bipeds with green skin, no external ears, and a short tapir-like trunk. Their mouths contain Human-like teeth. Their hands have four digits, including an opposable thumb.

Kalifadik has been described by Agent K as "a planet with a peculiar justice system". Kalifadik enforcers travel to other planets to arrest those they regard as criminals and act as judge and jury, transporting their targets directly to prison facilities without trial. The planet Kalifadik is ruled by a High Council.

Kalifadik weapons can transport targets to close or distant locations, and thus can be used creatively in combat. They can use the teleportation beams on themselves to get away from danger, and teleport large objects to hit enemies from above.

Retrieved from "https://aliens.fandom.com/wiki/Kalifadik?oldid=180404"
Community content is available under CC-BY-SA unless otherwise noted.