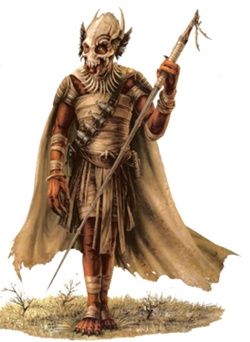 Up to 80 standard years

The Kaleesh were reptilian humanoids originating from the planet Kalee. They had scaly skin, tusks, and long nostrils, though few outsiders ever saw a Kaleesh face that wasn't obscured behind a traditional mask. Kaleesh culture was deeply spiritual and warlike. War was see as an essential part of life, and wars between tribes were common. A well known Kaleesh warrior was the Kaleesh cyborg General Grievous.

Kaleesh had reddish brown scaly skin, four clawed hands, and five clawed feet. Each Kaleesh hand featured two opposable thumbs. Because of the thermal pits under their eyes, Kaleesh could see in the dark. Tusks protruded from their upper jaw, and shorter ones jutted from their chins. Kaleesh had large pointed ears and long nostrils stretched close to the eyes. They had a very keen olfactory sense and were able to produce pheromones.

The Kaleesh were a spiritual people, and believed that those who performed great deeds in life became gods in death. Therefore, burial places were sacred to them. A large number of temples were devoted to their ancestor gods, the holiest of which was called Shrupak. Abesmi, a great monolith of stone in the Jenuwaa Sea, was the place where the Kaleesh believed that the gods ascended to the heavens. As of the New Republic era, the late General Grievous, former Kaleesh warrior Qymaen jai Sheelal, had joined his species' pantheon of religious deities.

Their society was divided into numerous tribes, and the Kaleesh were known to take multiple wives and have many children. War was viewed as an essential and sacred practice, and the culture's large emphasis on honor was known to spur many acts of vengeance among the various tribes. However, when necessary, the tribes would put aside their differences and bond to fend off a common enemy.

Kalee is the homeworld of the Kaleesh. It was the fourth planet orbiting the star Imnec, located on the border of the Kadok Regions. Kalee was covered in tropical-looking foliage and beaches. Moss covered canyons and cliffs filled the landscape. It was apparently a very harsh world, and wanting for resources. Kaleesh housing and buildings were very temple-like in design.

The Huk War was a long conflict that occurred prior to the Clone Wars, beginning when the Yam'rii of the neighboring planet Huk, having overpopulated their own planet, began taking over and colonizing nearby worlds, eventually arriving at Kalee. Millions of Kaleesh were captured and sold into slavery. The Kaleesh, led by Qymaen jai Sheelal and Ronderu lij Kummar, rebelled against their invaders in a series of bloody battles that would leave multitudes dead on both sides.

After obliterating the Yam'rii on Kalee, Sheelal led his warriors to the Yam'rii colony worlds and began massacring civilians and soldiers that inhabited the planets. The Yam'rii petitioned in the Senate for Republic intervention, and got as much when the Jedi arrived to end the war. The Senate imposed harsh sanctions on Kalee, plunging the world into an economic crisis. This crisis came to an end when the Inter-galactic Banking Clan helped the planet in economic repairs in exchange for the services of Grievous.

Following the Huk War, the Yam'rii desecrated burial grounds on the Kaleesh planet of Oben. This prompted Sheelal to return from working for the Banking Clan so that he could again lead the Kolkpravis, a Kaleesh military force that was armed and trained by the Republic. His shuttle was sabotaged by the IBC, nearly killing him and killing all but one of his Izvoshra, elite warriors who protected him and carried out his will. Qymaen was later resurrected as the Separatist cyborg, General Grievous, who played a pivotal role in the Clone Wars.

Presumably, in exchange for IBC financial assistance, the Kaleesh supported the Confederacy of Independent Systems during the Clone Wars until it's defeat in 19 BBY. Years after his death at the Battle of Utapau, the Kaleesh worshipped Grievous as a deity. The sole surviving Izvoshra, a tyrant of Kalee's western hemisphere named Bentilais san Sk'ar, rallied the Kolkpravis and led the slaughter of the Yam'rii on Oben, where he subsequently moved his people.

Qymaen jai Sheelal- Better known as General Grievous, Sheelal was a Kaleesh warlord who took part in the Huk War. It was during the conflict that he learned the art of war, specializing in a slug thrower rifle. After amassing a great number of Huk kills, Sheelal was reverred as a demigod among his people. His becoming a cyborg was part of the Separatist plan to wage war on the Republic.

Ronderu lij Kummar- A master of the sword and a personal friend of Sheelal. She fought beside him during the Huk War. The two became very close before she was killed at the hands of the Huk. Her death was what led to Sheelal changing his name to Grievous.

Sheelal and Kummar fighting the Huk 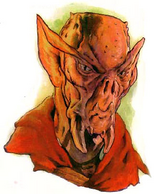 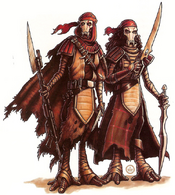 Members of the Kolkpravis
Add a photo to this gallery
Retrieved from "https://aliens.fandom.com/wiki/Kaleesh?oldid=184378"
Community content is available under CC-BY-SA unless otherwise noted.