Alien Species
Register
Don't have an account?
Sign In
Advertisement
in: Doctor Who Universe, Sapient Species, Humanoids,
and 8 more 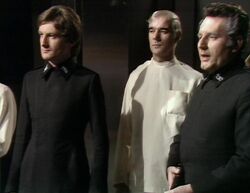 Doctor Who
The Kaleds, along with the Thals and the Mutos are one of the three native sapient species of the planet Skaro. It is unknown whether the Thals and Kaleds were different factions of the same race or different races.

The Kaleds fought a bitter centuries-long war with the Thals for possession of the planet, bombing most of it to a barren wasteland in the process. One of their most brilliant scientists, Davros, believed the mutations that some people suffered as a result of the war. He calculated what he believed the Kaleds would become and designed what was initially known as a "Mark IV travel machine". However Davros's twisted mind slowly changed it into a dangerous killing machine, which ultimately would become known as Daleks, which he hoped would ensure the Kaleds victory in the war.

Davros was determined to achieve victory, and when the Kaled government attempted to shut down his operations, Davros decided a new course of action. He tricked the Thalls into firing a missile at the Kaled dome, wiping out most of the race save for those still in the bunker, and then sent the Daleks as a retaliation for the assault to destroy the Thalls completely. Davros tricked the few remaining scientists who still opposed them into revealing themselves, and they were all killed by the Daleks. However, Davros's scheme backfired, as the Daleks turned against their creator, apparently killing him and the few loyal men. The base was shortly after destroyed by a young Thal woman, effectively sealing it.

The Kaleds have been almost completely destroyed, the only known survivor being Davros, and all that remains of them is the Daleks, which became one of the most feared beings in the universe.