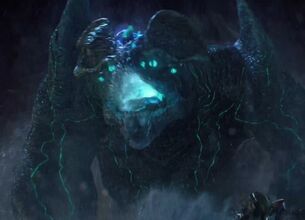 Kaiju is the designation given to a group of titanic-sized, silicon-based organisms used by extradimensional beings called the Precursors to begin colonization of a planet.

Kaiju are immensely large creatures, hundreds of feet in height and length and thousands of tons in weight. Their size is so great that they require two brains for thinking and motor control. They tend to have thick, rubbery skin and bioluminescent patches; beyond that, their appearance varies drastically. They have varying numbers of eyes and limbs, and some of them combine vertebrate and invertebrate traits. Bipedal Kaiju generally have four arms, a large upper pair and a smaller lower pair. It is unclear if each Kaiju is a unique, custom-made creature or a representative of a particular "model" or phenotype.

Kaiju are also symbiotic creatures, and their bodies serve as an environment for a crustaceanoid parasitic creature known as the Kaiju Skinmite, which needs high quantities of ammonia to live.

Kaiju are amphibious, and can survive equally well in air or water. They can also survive underground or even in space, although the latter ability has yet to be seen in any Pacific Rim material.

Kaiju are silicon-based organisms. Their blood, called Kaiju Blue, is an ammonia-based fluid. It is corrosive, highly toxic to humans, and rapidly vaporizes in air following a Kaiju's death. It also reacts with extreme violence to rare earth elements.

The intellectual capacity of an individual Kaiju is hard to tell, but it is known that they possess a hive mind of sorts, and are able to devise battle strategies and concentrate their attacks on urban areas. However, it appears that the higher the category of Kaiju, the more intelligent it gets.

Kaiju are made rather than born. Their tissue is cloned from a single strand of DNA, and the Precursors "build" the creatures by attaching the cloned parts to each other. However, at least some are capable of independent reproduction, as Otachi was pregnant when she arrived on Earth. It is unknown if this reproduction is sexual, hermaphroditic, or asexual in nature.

The Kaiju were created by the Precursors with the plan that they could wipe out humanity so the precursors could colonise Earth. The Precursors created a breach in the Pacific Ocean which was portal between our universe and the Anteverse. The Precursors then started sending Kaiju through to attack Earth. They attempted this in the Triassic era but the co2 levels were too low but since humans had been pumping co2 into the atmosphere the conditions in present day were just right.

In August 2013 the First Kaiju they sent through was Trespasser. Trespasser was extremely tough (likely because he was the first one). Trespasser rampaged and destroyed three cities (San Francisco, Sacramento and Oakland). Before it was finally killed by three nukes. The humans thought this was a one off event and moved on. However six months later another Kaiju named Hundun attacked Manilla. Hundun was also killed by a nuke. A kaiju called Kaiceph then attacked Cabo San Lucas. Another Kaiju then attacked Sydney (Australia) and these Kaiju attacks continued causing the birth of the Jaeger program.

The Jaeger's were far more effective at fighting the Kaiju than traditional military and were able to hold the Kaiju back.

In 2016 Onibaba attacked Tokyo but was killed by Coyote Tango.

In 2017 Gipsy Danger was constructed and killed the category 3 Kaiju Yamarashi, who was said to be the biggest Kaiju so far.

The first category 4 Kaiju emerged in December 2019. It was much more powerful than previous Kaiju, and took 3 Jaegers to kill it. This was the beginning of the turning point in the Human Kaiju war.

In February 2020 the Kaiju Knifehead emerged from the Breach. Gipsy Danger was sent to fight the Kaiju and they battled partly submerged in water which gave an advantage to the Kaiju. In the battle Knifehead was killed but one of the pilots of Gipsy Danger also perished and the Jaeger itself was heavily damaged.

Over the next 4 years Kaiju began to over power Jaegers as more and more were destroyed. Until by 2025 only 4 Jaegers remained. People began to lose faith in the Jaeger program and funding for it stopped and instead more money was invested in building the Anti-Kaiju wall which quickly failed as it was destroyed when the category 4 Kaiju Multavore burst through it in Sydney. This Kaiju was eventually killed by the Jaeger Striker Eureka.

After the failure of the wall, Marshall Pentecost comes up with a plan to destroy the breach by sending Striker Eureka to destroy the breach with a thermonuclear bomb. However a scientist drifts with a Kaiju brain which causes the Precursors to send 2 Category 4 Kaiju (Otachi and Leatherback) through the breach to kill the scientist as he had discovered valuable information about the Kaiju and Precursors. This was the first time 2 Kaiju had attacked at the same time. However the two Kaiju were met with the resistance of 3 Jaeger's (Striker Eureka. They battled in the cost of Hong Kong until Otachi destroyed Crimson Typhoon and killed its 3 pilots by crushing the Jaeger's head with her tail and Cherno Alpha was destroyed by Leatherback who crushed the Jaeger and drowned its pilots. Otashi then left to find the scientist while Leatherback disabled Striker Eureka by sending a electromagnetic pulse. The final Jaeger (Gipsy danger) was then deployed and prevented Leatherback from finishing of Striker Eureka. Gipsy danger then engaged in a battle with Leatherback which moved into the city. Gipsy danger eventually killed Leatherback using its plasma caster and shooting the Kaiju in the chest. Gipsy Danger then tracked down Otachi just in time to prevent her from killing the scientist. The Jaeger and the Kaiju then engaged in a fierce battle when Otachi suddenly revealed she had wings and began to fly carrying Gipsy Danger with her however Gipsy Danger used a sword to decapitate Otachi in mid flight causing the body of the Kaiju to plummet to the ground along with the Jaeger who managed to survive.

The two remaining Jaegers are sent to finish the original mission. However it is soon discovered that The Breach can only be entered by a Kaiju. They figure out that if they use the body of a Kaiju, they can still enter The Breach. Two Category 4 Kaiju are sent to guard The Breach (Raiju and Scrunner). A third Kaiju also emerges called Slattern who is the first category 5 Kaiju. The final battle happens at the bottom of the Pacific Ocean where Gipsy Danger Slices Raiju in half with the sword and Striker Eureka self destructs killing Scrunner and injuring Slattern. Gipsy Danger then attempts to use one of the halfs of Raiju to enter the breach but Slattern reveals he has survived the nuclear blast and stands in the Jaegers way. Gipsy Danger then uses her thrusters to push Slattern through the breach causing them both to fall through. Gipsy danger finishes Slattern using her nuclear turbine to burn him. Using Slattern's body, Gipsy Danger enters the Anteverse. Pilot Raleigh Becket then self destructs Gipsy Danger , collapsing The Breach from within and ending the Human Kaiju War.

Kaiju are divided up into Categories depending on how dangerous they are. So far there are 5 categories with Slattern being the only known Category 5.

Retrieved from "https://aliens.fandom.com/wiki/Kaiju_(Pacific_Rim)?oldid=202813"
Community content is available under CC-BY-SA unless otherwise noted.