The Kahler are a species from the Doctor Who Universe. They are most famous for their technological skills.

Kahler look identical to Humans except for green patterns on their faces. These patterns are unique and can be used to identify an individual.

The Kahler come from a planet that is also called Kahler. During a war that lasted nine years, half the planet was ravaged. Other than that, little information is given. The Gunslinger says that he is from an area called Gabrean. Kahler-Jex states that he knows that area and says that it is a beautiful place.

Individuals were always identified with the word "Kahler" in front of their name. They worship gods and believed that after dying, you had to climb a mountain carrying all the souls of those you've wronged.

The Kahler were most famous for their technology; the Doctor called them "one of the most ingenious species in the galaxy". They had spacecraft, hovering robots, teleportation, and could easily cure cholera.

During a war in the 19th century, they created an army of cyborgs using Kahler soldiers. These soldiers were equipped with a powerful energy weapon, an eye lens that had an automatic targeting system, sensors that could see through walls and identification software. They were also fitted with a short range teleport device.

Kahler-Jex- One of the scientists that worked on creating the cyborg army. He and Mas escaped Kahler when the Gunslinger began killing the team that created it. At the end of the episode, he states that he must face the souls of those he has wronged, saying that "perhaps they will be kind". He then kills himself by activating his ships self-destruct.

Kahler-Mas- One of the scientists that worked on creating the cyborg army. He and Jex escaped Kahler when the Gunslinger began killing the team that created it. He is seen being killed in the opening scene of the episode.

Kahler-Tek- Also known as the Gunslinger, he was one of the cyborgs created to fight in a war on Kahler. Afterwards, he begins killing the team that created him. In the final moments of the episode, it is shown that he took over as the new sheriff of Mercy. 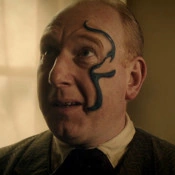 Kahler-Tek
Add a photo to this gallery
Retrieved from "https://aliens.fandom.com/wiki/Kahler?oldid=103200"
Community content is available under CC-BY-SA unless otherwise noted.