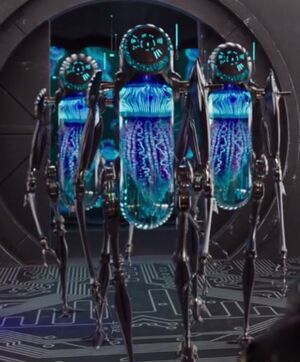 telepathy, feeding on negative emotions from other sapient beings

The KCO2 are a race of jelly-fish like aliens that survive on land using robotic exoskeletal suits to walk on dry land and were the fifth species to board the city of Alpha. Each suit they wear slightly varies from each other because of how each suit is custom made by the KCO2 that wear them. Each KCO2 is 80 cm in legth and in their suits, they're about the size of a normal human. The KCO2 also have a suprisingly long lifespan of 300 earth-years.

Retrieved from "https://aliens.fandom.com/wiki/KCO2?oldid=158462"
Community content is available under CC-BY-SA unless otherwise noted.