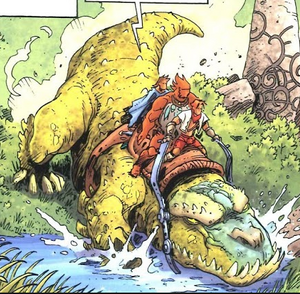 Lanfeust of Troy
Kört are a species of reptiles used as mounts on the planet Troy.

Kört are large quadrupedal crocodiles that used as mounts. Inhabitants of Troy use a bit that possesses needles that press the palate and stimulate the brain in order to direct them.

Retrieved from "https://aliens.fandom.com/wiki/K%C3%B6rt?oldid=166168"
Community content is available under CC-BY-SA unless otherwise noted.