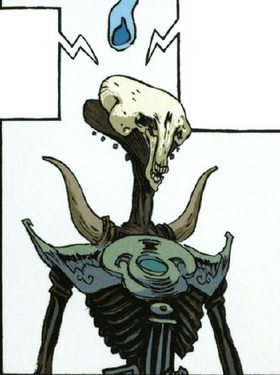 Käron is presumably a god that manages the Stycxz Express in the Valley of Shadows.

3,110 years prior to the start of the series, Käron was ferrying souls as per his usual duties. Leaving port he witnessed a soul of a recently deceased woman managed to escape the grasp of the Eater of Lost Souls and board his ship. Many of the souls already on board wanted to throw her overboard, but he intervened saving the girl named Dyssëry. Liking her will to survive the two talked about her potential future in the afterlife. He warned her that she should make a choice of what kind of supernatural being she would convert to lest she become prey.

Retrieved from "https://aliens.fandom.com/wiki/K%C3%A4ron?oldid=141990"
Community content is available under CC-BY-SA unless otherwise noted.