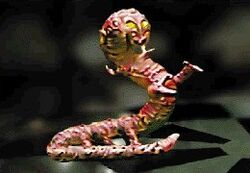 Star Wars
K'lor'slugs are dangerous vermiform pests indigenous to the swamps of Noe'ha'on, where they're infamous for invading the darkest corners of unsanitary space vehicles. Because of the fact that they could and would lay more than 300 eggs in a single birthing period, with each egg releasing a ravenous hatchling, infestations aboard said stellar-bound vehicles would quickly become difficult to control, even becoming potentially fatal to the crew. They utilized a keen sense of both olfaction and visualization, and hunted using their venomous physiology.

Despite their hugely dangerous pest potential, they are best known for being represented as one of the many holomonster playing pieces in the board game of dejarik.