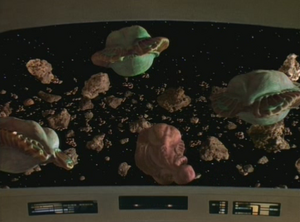 Junior's species (for the lack of a better name for them) are large, fusiform, space-dwelling lifeforms. Almost as large as a Galaxy-class spaceship as adults, their physical structure is described as consisting of plasma energy contained inside a solid shell made out of silicates, actinides, and carbonaceous chondrites. They can emit strong electrical discharges when feeling threatened.

These creatures are gregarious and take care of their young. They are commonly found in asteroid fields and are able to change colors quickly like a cuttlefish, presumably for communication purposes. They also emit radio waves and other kinds of radiation, probably for long-distance communication in space. Their propulsion system is unknown, but they move through space vacuum smoothly and might be able to achieve warp speed. Their sapience level is unknown.

The individual nicknamed Junior attached itself to the starship Enterprise and started feeding on its power sources much the way newborns of this species normally do with their own parents for nourishment. Junior was orphaned after the Enterprise was forced to kill its mother in self-defense, but was later taken to an asteroid field were it was found and adopted by other adult members of its kind.

Retrieved from "https://aliens.fandom.com/wiki/Junior%27s_species?oldid=128825"
Community content is available under CC-BY-SA unless otherwise noted.