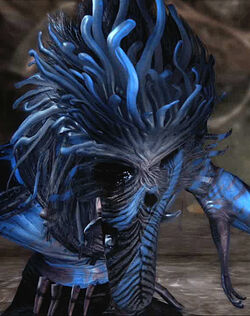 The Felucians are a tall, bipedal amphibious species and have natural camouflage that allowed them to seemingly disappear into their surroundings. They are equally at home on land or water, and traveled the swamps easily. Both their arms and legs end in limbs with four cup-like, webbed fingertips. Their suction cup-like limbs enabled them to stick to surfaces. Springing from the underside of each arm is a second short arm, which ends in three large and agile fingers. Their faces are constantly covered by masks. 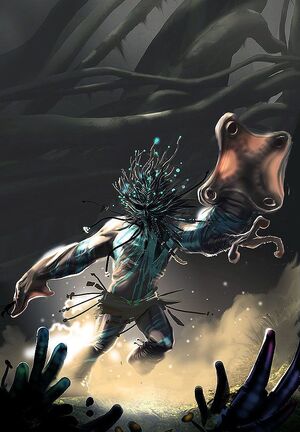 Though Felucia had long been colonized, Felucians avoided notice for a long time by living deep in the jungle, where few colonists would venture without a strong cause.

Throughout their history, Felucians were often regarded by most other sentient species to be primitive and savage. They had long thrived and flourished in the wild jungles of their home planet without the development of any advanced technology, which was in part, largely due to their natural affinity to the Force.

During the Clone Wars, the entire species became threatened under the destruction of the many battles fought on the surface. Entire forests and regions were left scarred and ultimately uninhabitable. By the close of the war, however, the Felucians were able to use the Force to aid the forests in their regeneration.

During the Great Jedi Purge, Jedi Master Shaak Ti arrived on Felucia to hide from the Galactic Empire. Seeing the Force potential inside the Felucians, she trained them to use the Force for both attack and defense all the while encouraging them to resist the temptation of the dark side. During the Purge, Shaak Ti also discovered Maris Brood, a Zabrak Jedi padawan on the verge of the dark side. Seeking to help her stay on the light, Shaak Ti took Maris Brood with her to Felucia and trained her as her new master.

Then, around 3 BBY, Darth Vader's secret apprentice Starkiller arrived on the planet in search of Shaak Ti, who he was assigned to kill. The Felucians attempted to defend the Jedi Master, but all who met the Jedi hunter were brutally slaughtered. Some of these had managed to tame the Rancors native to their jungles, and rode them as battle mounts. Unfortunately, Starkiller managed to defeat Shaak Ti, who flung herself into the Ancient Abyss following her defeat. Unfortunately, Shaak Ti's influence had kept the Felucians from slipping into the darkness. With her death, the Felucians succumbed to hatred and anger, particularly under the influence of Maris Brood, who had embraced the dark side herself following Shaak Ti's death. The corrupt Felucians became insane under the power of the dark side. Their entire physical appearances became twisted, and the natives began rampaging throughout the planet, recklessly attacking anyone on sight with nothing in mind but bloodlust. When the Imperials came to exterminate their kind, many Felucians hid within the body of the giant Sarlacc Pit that Shaak Ti perished in. The Imperials held the Sarlacc captive to enter and exterminate those hidden inside.

Eventually, Starkiller, whose real name was Galen Marek, returned to the planet once more to rescue Senator Bail Organa from Maris Brood and her Bull Rancor. After an intense duel, Brood realized that she could not hope to win. She promised that she'd turn her back on the dark side if he spared her life, and he obliged. A Felucian shaman.

Aside from a brief encounter with agents of Senator Bail Organa, it is unknown what happened to the species after Maris Brood left Felucia in an effort to turn away from the dark side. 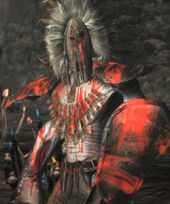 The outsiders viewed Felucians as strange and alien beings, because they operated on a different social level, much like the Tusken Raiders on Tatooine. But unlike other primitive species, the Felucians did not split into separate tribes but were instead all members of a single tribe, split across their various villages. Each village's members were split into various castes: chieftains, shamans and warriors. Due to their connection to the Force, which gave them a somewhat primal attitude, Felucians were careful not to fall to the Dark Side and fed those that did to Felucia's Sarlacc. They were also influenced by the planet itself, which could result in entire villages being driven into an insane bloodlust. This also affected them physically, causing their bodies to mutate to reflect their tortured psyches. Most Felucians were subjects to rather wild mood swings, which resulted in them reacting to the same situations in a variety of different ways.

The Felucians were divided into a caste-based society, with each member fulfilling various roles. The most common of these were the warriors, who hunted and defended their people. The shamans were of a higher caste that healed their kin from injuries and served as leaders to their people, giving moral advice and teaching the ways of the Force. The highest-ranking members of the race were the chieftains.