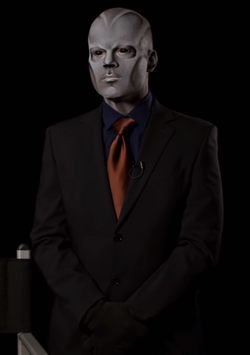 An unnamed humanoid sapient species from Sol in Sol System.

They are humanoid species that have gray skin and entire black eyes. This specie was living on Sol. This species is very intelligent and have telepathic abilities.

One representative of this species, known as Julian deVascez was living on Earth examining planet and Human traditions in Australia, Chile, England, Poland and Spain. He was acting in Polish 1980s TV series called Gliniarz i Kosmita.

Retrieved from "https://aliens.fandom.com/wiki/Julian_deVascez%27s_species?oldid=166714"
Community content is available under CC-BY-SA unless otherwise noted.