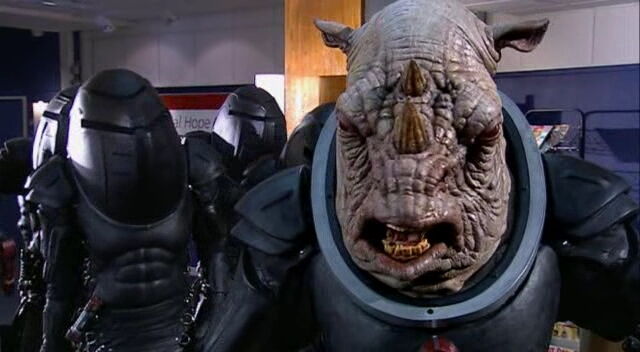 Doctor Who
The Judoon are an interplanetary police force-for-hire.

The Judoon are a race largely resembling bipedal rhinoceroses. They are stocky and have yellow blood. Female Judoon have a mowhawk whereas males are bald.

Their language is mainly one or two-syllable words ending with 'o', though they can communicate using a speech translator from other species.

They are a mercenary police force for the Shadow Proclamation, known for their strict policy to law and their brutal, almost ruthless ways of going about it. They follow the rules at all costs, even if it's a pay and display sign, and will vaporise any offenders with their guns. Despite their logic, they are known to be quite stupid on occasions

Retrieved from "https://aliens.fandom.com/wiki/Judoon?oldid=199662"
Community content is available under CC-BY-SA unless otherwise noted.