"And, really "Judgementites?" That was just juvenile."
―Dr. Lazarus 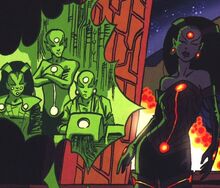 The Judgementites (not actual name) are the species that operates The Judgement Ship which is powered by their entire species confidence.

This species appears to be roughly human-sized bipeds with gray skin and pointed ears. There is not much known about their biology but there appears to be male, female, and child members of this species.

Retrieved from "https://aliens.fandom.com/wiki/Judgementites?oldid=172977"
Community content is available under CC-BY-SA unless otherwise noted.