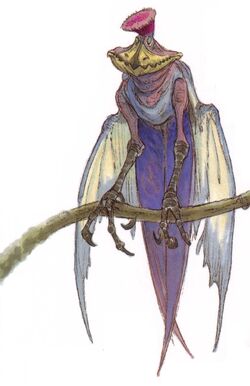 Jubba Birds are Force-sensitive reptavians indigenous to the swamp planet of Dagobah. They build large nests out of sticks and floral matter, using mud scooped up from the Dagobah swamps to cement the entire structure together. Because the materials for such a nest cause it to become heavy, they often droop downwards into the swamps, where predators often await to gobble up the eggs.

Jubba are deceptively intelligent avianoids, although domesticated versions will often play dumb in order to avoid harassment from their ignorant owners. Jubbas sold to more appreciative owners will occasionally allow their innate intelligence to show, and can became loyal companions. Many Jubba Birds are captured and sold by vendors as pets to be prized for their mesmerizing song. This song is a highly soothing whistle that they actually manipulate through use of the Force.

The "birds" portion of their name is a misnomer, as only species evolved from the birds known on the planet Earth are actual birds.

Retrieved from "https://aliens.fandom.com/wiki/Jubba_Bird?oldid=180914"
Community content is available under CC-BY-SA unless otherwise noted.