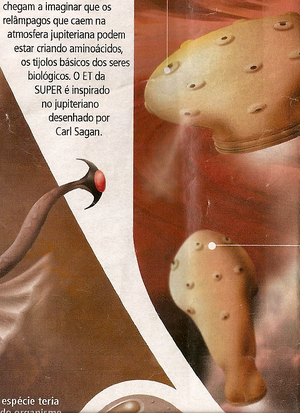 Jovians are sac-shaped floating creatures native to the atmosphere of planet Jupiter. The strong wind fills the hollow body of the Jovian, carrying it around. The creature can control its speed by contracting its body.

Jovians have many large pores on the upper side of their bodies, which are used to absorb nutrients from the environment. Inside the walls of its body there is a network system similar to the circulatory system of Earth's animals, which is used to deliver nutrients to all cells in the organism. Wastes are released when the creature contracts.

Retrieved from "https://aliens.fandom.com/wiki/Jovian_(Superinteressante)?oldid=166465"
Community content is available under CC-BY-SA unless otherwise noted.