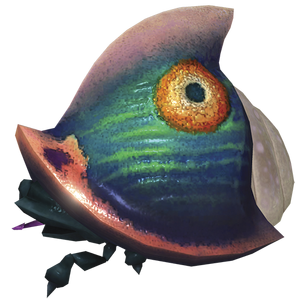 The Joustmite is a insect-like creature and close relative to the Cloaking Burrow-nit that was discovered by Koppaite ranger Captain Charlie on PNF-404 around numerous areas of their world.

The coloration of the armor on its head is colored green with orange eye markings, and the position of the shell made it seem more like an intimidation strategy rather than trickery, making it appear more dangerous than it really is. Its proboscis is needle-like, and is a efficient tool to skewer small prey, though its not strong enough to skewer Rock Pikmin.

While most standard Joustmites are found in northern areas of PNF-404, there was specimens of southern Joustmites known as "Flighty Joustmites". These Joustmites are orange in shell coloration with purple eye markings, sharpened edges along the shell and very small insect-like wings.

Despite their very small size, it is capable of flight, though it flies with a angled position with its armor weighing its head downward. While normally a problem for most fliers, the Joustmite's natural ability to shoot out its proboscis makes this disadvantage useful, as it can aim for prey while flying in the air more efficiently this way.

Retrieved from "https://aliens.fandom.com/wiki/Joustmite?oldid=181795"
Community content is available under CC-BY-SA unless otherwise noted.