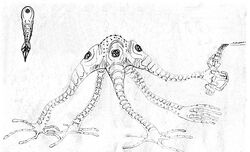 Jotoki have a torochord (ring-shaped) instead of a notochord, with 5 "self-sections" (apparently semi-independent brains) that operate the Jotok's body cooperatively. They begin life as small aquatic swimmers, most of which are eaten by predators; in time, five of the survivors will merge to form one collective organism, which grows into an arboreal adolescent; its tails become arms, and its fins differentiate into fingers. When it grows large enough, the adolescent imprints itself on an adult (if one is available) and enters a stage of rapid learning and brain growth.

A Jotok who desires a family can simply go into the wilderness and "harvest" an adolescent of the proper age. Unimprinted adult Jotoki are considered feral, and regarded as little more than animals. Since the five subunits that make up one Jotok individual are not necessarily genetically related, reproduction does not require sex; a Jotok can simply find a pond and deposit its offspring to begin the cycle again. Before their enslavement, Jotoki operated in groups called "clanpods", as part of their former planet-wide tradeweb. Details of this arrangement are not known. Jotok technological specialties included gravity polarizers, linguistics and biotechnology. They had the ability to force-grow clones to adulthood.

The Jotoki were also experts at trade. Their interstellar trade empire was quite developed for its time, but after using Kzin as mercenaries for many years, the Kzin revolted and conquered the Jotoki. The Jotoki became the slaves and food-animals of the ferocious Kzinti. In modern times, Jotoki are a seldom-seen slave race of the Kzinti. The Kzinti believe that there is a free Jotoki fleet wandering amongst the stars, which would have provided their most strenuous opposition (excepting humans).

Humans have recovered some larval swimmers in an attempt to breed a free race of Jotoki, although the success of this endeavor is unknown.