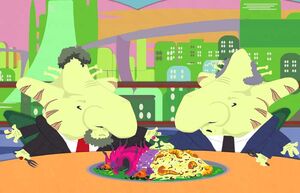 Joozians are a race of sapient organisms that apparently control all media within the universe. They have two ears but six limbs (four of which are focused as arms), very large noses, very tiny eyes, and a tapered skull. Their small eyes would indicate that they cannot see well and their main sensory organ is highly likely their noses. Male individuals have two sexual organs on their shouders called "Jagons", which are presumed to be roughly analagous to a human penis.

Four Human children named Stan Marsh, Kyle Broflovski, Eric Cartman and Kenny McCormick discovered that the Planet Earth was in fact an extraterrestrial reality show and that after only 100 episodes, the series had started to decline in its sensibility and the show was about to be canceled - in other words, the planet Earth was going to be demolished. Two Joozians took the boys out to lunch after their pleading and ended up at an interstellar topless bar before visiting a prostitute's hotel room. These two Joozians, at the time very drunk and high on Blach began to suck on each other's jagons and thrusted their fingers into one another's thrushers, which is apparently highly erotic in nature as well as incredibly inappropriate for the species, indicating one of their taboos. Kenny has the mind to take pictures of it however, allowing them to blackmail the Joozian duo. They chose to agree to erase everyone's memory of the truth about Earth in exchange for the photo evidence.

Retrieved from "https://aliens.fandom.com/wiki/Joozian?oldid=182260"
Community content is available under CC-BY-SA unless otherwise noted.