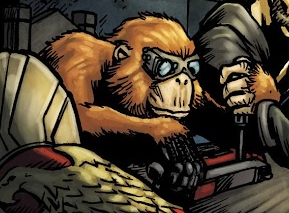 Warhammer
The Jokaero are a primate species that exist in the Warhammer 40k Universe.

Originally descended from orangutans from Ancient Earth, the Jokaero were one of many species that were uplifted by the Slann in the war against the Necrons.

During the First War in Heaven, the Jokaero were raised by the Old Ones to aid them in the war against the C'tan and their Necron thralls. However as the war progress, the Warp itself became disrupted, bringing forth predatory creatures such as the Enslavers and Daemons. These entities began to manifest into the material universe and the Old Ones were overrun, collapsing their ancient empire.

Despite the destruction of their masters, the Jokaero developed on their own, well into the 41st Millennium where the Age of the Imperium persisted.

The Jokaero are a fascinating species, some savants unsure if they are truly intelligent despite their capable of remarkable acts of engineering, construction and problem solving. Their most notable ability is while they are technically brilliant they possess an innate understanding of technology.

In terms of society, Jokaero live in large family groups that consist of a dozen individuals. They roam the galaxy possessing no culture or language with their sole objective being survival.

Retrieved from "https://aliens.fandom.com/wiki/Jokaero?oldid=156981"
Community content is available under CC-BY-SA unless otherwise noted.