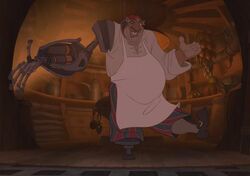 Brian Murray Bell
John Silver is a cyborg pirate who took part on the RLS Legacy expedition to find the mythical Treasure Planet, where Captain Nathaniel Flint hid his fortune.

Silver belongs to an unidentified humanoid species with mammalian traits. Having lost nearly half of his body in an undisclosed accident related to his pursuit of the treasure, he became a cyborg. His mechanical arm is equipped with numerous tools, knives and mechanisms, and his mechanical eye can locate and lock on targets.

Acting as ship's cook, Silver was pivotal in arranging for him and the other pirates to be hired as the Legacy's crew and secretly plotted a mutiny, which was carried out with some success, although Captain Amelia, Dr. Doppler and Jim Hawkins all managed to escape, along with Silver's alien pet Morph, who was at the time disguised as a map, leading Silver and the other pirates to believe that the group had taken it.

After recapturing them and getting hold of the real map, they managed to find the entrance to the treasure chamber hidden at the center of the planet, but in the process set off the self-destruct mechanism. Silver did manage to retrieve some of the treasure, and gave some off to Hawkins before escaping in one of the lifeboat's to parts unknown.