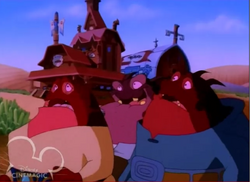 Buzz Lightyear
Jo-adians are a sapient extraterrestrial species from the planet Jo-ad.

They have a unique biological aspect, their brains are not entirely within their heads. They actually posess a lower brain, that seems to be mostly responsible for their personalities!

The race also seems to have a biological dependency on the Bunzel, they seem to need to harvest it annually otherwise they will go through a violent transformation. They go through what is called Bunzel Fever their eyes change, and they grow a tail, and ravenously seek the vegetable product.

In one episode of Buzz Lightyear of Star Command, Booster was devolved with the De-Evolved Gas and turning to a red dinosaur-like creature with a stegosaurus-like tail thagomizers, spike nose horn and ankylosaurus-like spikes on the side of the body, thus hinting that they evolved from dinosaur-like ancestors and must shrunk due to becoming more humanoid or, perhaps, a decrease in certain elements (presumably oxygen) in their local atmosphere, as is often believed to have caused the life on Earth to shrink so dramatically as well.

Jo-adians are an agricultural race, responsible for the galaxy's fresh crops, dairy and vegetable-analogs, etc. They are mostly farmers and a peaceful race, having an old western farms and Western accents.