"With my blessing, the Brutes now lead our fleets! They ask for your allegiance, and you shall give it!"
―Prophet of Truth 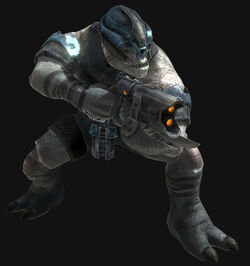 Jiralhanae, more commonly known as Covenant Brutes, are a race of simians from the planet Doisac who have been inducted into the unified conglomerate races of the Covenant. The term "brute" comes from their extremely savage nature.

Having evolved from a very simian-like organism, they are notable for resembling large gorillas, but in some ways also resemble rhinoceroses and bears, although this is not surprising as due to their having evolved on an entirely different planet from Earth, they can in no way be actual simians, and therefore do not have to fit into their narrow evolutionary trait system. Jiralhanae have thick, extremely resilient gray skin which is covered in clumps of matted, fur-like hair that can be either a tan, brown, or even black color. Their chin hair is always black it seems, and many build these into short beards. They are physically large and stocky, likely caused by the gravity of their homeworld, which is about twice as heavy as that on Earth. As such, they stand around 9 feet tall and very imposing, and remain immensely strong even upon being pierced by a multitude of bullet wounds. Interestingly, this height not only allows them to tower over their human opponents, but most of their allies within the Covenant as well.

Thanks to their heavily muscled bodies and their natural, animalistic brutality and strength, they are sufficiently capable of dealing with foes relatively simply even when disarmed, by closing quarters and entering close combat, where they can tear a foe literally limb from limb, or use their very sharp teeth to maim, and potentially eat their victim. In comparison to a human, however, they only have four digits on each hand including their opposable thumbs, which actually allows them to make use of a variety of weapons both of Covenant and Human design. In this course, their preference for violence leads them to generally prefer to use large, rapid-firing and often powerful weapons.

With their ferocious nature and thick, shaggy fur covering most of their bodies except for the head and shoulder blades, one may immediately consider them thick-headed, stupid, or mentally slow in some other way. This couldn't be further from the truth, and they are in fact fairly cunning tacticians, and can pilot vehicles and ships, as well as command both land-based and fleet encounters with a strategic competence stereotypically unbecoming of their "brutish" nature, albeit lacking in artistic flair.

When a young Jiralhanae finally reaches full maturity, they will have begun to naturally release pheromones. These are used as a form of communication between pack members, and can tell others how they are feeling just by their scent. Also at maturity, though, they learn to control their pheromones, and once they have mastered the technique, are likely capable of stopping their processes altogether. It is not well understood as to whether there is a natural advantage to this or if it is because it is some form of social taboo in their culture. Another way they will speak to one another is much more recognizable, and is through the use of vocal chords. While naturally they will speak to one another through loud roars and grunts, they are certainly capable of speaking more complex tongues, and will do so when amongst other species. They have mastered human dialog, it would seem, as well. When speaking coherently in such a way, their voices come out sounding deep and gravelly.

Their blood seems to be a mix of both red and blue hues, and can at a casual glance appear purple. Closer inspection may reveal that there is more red or more blue within, although why this is the case is cause for speculation and confused head-scratching. Also curious, is that when red is more common, splotches of blue will be found throughout, but when blue is more common in the stream, it comes out appearing very dark blue - almost black in appearance.

As a Jiralhanae ages, their colored fur will change over time to a grayish-silver, which is a symbol awarding great respect from all other Brutes. It is always elders like these who are seen as chieftains, and chieftains are denoted by their ceremonial Gravity Hammer that they carry. In order for a new pack chieftain of a tribe to arise, one must challenge the current chieftain to a mortal duel, with the victor claiming the title after executing the other. At this time, the hammer is then also passed down to the winner. Chieftains are always males as their culture is extremely patriarchal and war-influenced, and females are not allowed to fight.

While they have always been known to wear armor, Tartarus' clansmen (not including Tartarus himself) removed this when they cast down the Sangheili and took their roles from them. While no reason is known for certain by this, it may have been either ritual, frenzy, or, perhaps most likely, a way to try to try and "show off" to the Prophets as they had, up until that point, been relatively neglected, and they wanted to prove just how much greater than the heretical Sangheili they actually were, and by extension how worthy they were to serve the Prophets at this new-found level. With the death of Tartarus, however, all Brutes donned their power armor once more, and have begun to shave their faces. Why they suddenly took to this was not entirely known, although it could be some form of cultural grieving for their lost warchief, or even to "look more presentable" to the Prophets. Another choice might be that they were so low on the rung before of the Covenant hierarchy that they were not permitted the "energy" to allow them to remain groomed before, in a somewhat similar way that Unggoy and Kig-Yar are considered worthless and essentially not worth the effort of a tremendous amount of upkeep...or perhaps they shaved to increase their fearful effect they would have on their opponents.

A Jiralhanae pack is extremely closely knit, and the death of a member of their tribe can cause the others to descend into a furious, highly aggressive killing-rage. In this frenzied state, known as berserking, their incredible physical strength combines with their dogged self-determination to avenge their lost "brother" makes them a true force to be reckoned with, as their lack for self-preservation allows them enough strength and durability to kill even Hunters by slamming into them enough times. Piloting a vehicle will in no way save you for certain, and the berserker(s) will board certain smaller craft such as a Covenant Wraiths, or force the foe out to tackle them on the ground, in vehicles such as Covenant Spectres or USNC Warthogs. They seem to still have enough common sense not to attack or hijack low-flying aircraft, like the Covenant Banshee. This cannot be mistaken for genders, as only male Brutes are sent into battle. A pack may also take part in a howling ritual after the death of a strong or otherwise worthy adversary.

Their species is one who seems to believe in the Covenant's great journey, and are an extremely religious lot. One religious ritual of theirs was the blessing of food before they ate it. It is unknown if their religious zealousy has in any way led to their savage natures. While on Delta Halo, many Brutes first came into hands-on contact with the Human weapon known as the M90 Shotgun. This seemed to be a weapon of interest amongst their species, and of the few who survived Master Chief Petty Officer SPARTAN-117's attacks, at least a single shotgun was brought back to Covenant grounds, where they reverse-engineered a new favorite weapon, a handheld version of the shotgun known as a Mauler. Jiralhanae technology also exhibits many spikes and serrated edges to adorn their weapons, vehicles, and armor, also likely due to their love for brutality.

Many Jiralhanae names, such as Tartarus, Maccabeus, and Braktanus, all end in a -us suffix. This is added to the end of their name in honor, denoting maturity or experience in battle. There was however a shipmaster named Gargantum; as to why he was missing the common suffix is unknown.

The Jiralhanae were members of the Covenant before the destruction of the farming planet, Harvest, but were suppressed and purposefully kept in low-ranking positions for as long as possible by the Sangheili, who greatly feared their goals and ambitions and how they might corrupt the Covenant. Despite this low position, the Brutes continued to have high aspirations, and they quickly adopted a zealous belief in the Covenant's Great Journey, mainly due to a blind faith in the Covenant armada. It would be the deceitful Ord Casto who would put the Jiralhanae into power over the Sangheili Elites when they fell into an alliance together during the Battle of Harvest. This plot continued to gain headway until the Covenant eventually split itself between the Covenant Loyalist Brutes and the Covenant Separatist Elites. At this sudden crossroads and with the sudden death of the High Prophet of Regret at the hands of Spartan-117, they were swiftly lifted to the rank of the Honor Guards of the Prophets, ousting the former and traditional holders of this role, the Sangheili themselves. Immediately they began to protect the Prophets with utmost ferocity, although in doing so, they suffered the cost of their warchief, Tartarus.