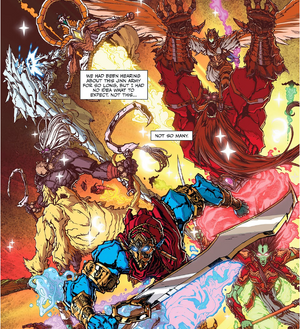 Jinnrise Universe
The Jinn are a ethereal race that hail from Earth. They are an ancient race that existed before the rise of man thousands of years ago.

Like humans jinn are a diverse race. Some possess animal traits, a variety of colorful skin tones, and builds, even reaching skyscrapers. Jinn do not consume normal food as humans do, but rather devour the bones of animals for sustenance. In addition they are capable of magic, able to change their structure to that of a two-dimensional being, and even in rare cases see through illusions.

According to a alien quantum physicist, he theorizes that the jinn while seemingly material in the universe are in fact not part of the current universe. That they are in fact from another universe where the laws of physics do not apply. Owing to this, it explains why the jinn are capable of feats that are seemingly magic when in fact they are simply not bond by the rules of this universe but instead following a set of rules from their native dimension.

The earliest histories of the jinn states that they originated from Ancient Persia. There a human king ruled over a thriving and prosperous nation, the like of which had never been seen in human lands. The kingdom amassed such riches that even the jinn were drawn to its beauty.

Some of the jinn's unsavory elements took advantage of their great racial powers and sought to conquer man in the name of greed. In turn humans took arms against the jinn in retaliation to these crimes. Atrocities were committed on both sides, however there were some who knew compassion. Khashtar, a honorable general in the service of king found a baby orphan jinn whose parents were murdered by human bandits, chose to adopt him and raise the young jinn as his own. He was named Daiuk and was raised with the value of integrity and kindness in all. Khashtar was always at the front-lines battling jinn raiders, but despite his constant battles he sought peace and coexistence with the jinn. He appealed to the jinn leaders, to King Jabal, the ruler of the jinn to intercede on the jinn villains that were terrorizing his people. Jabal however rebuked his accusations refusing to believe a human, believing that no jinn could ever act this way.

Daiuk, Khashtar's adopted son wished to help his father and bring peace between the two races. He sought to even the scales of power so that the jinn would no longer abuse humanity. Calling the assistance of the kingdom's scientists they developed vessels, bottles that would contain the jinn. The artifacts were meant to be used as leverage and force the jinn to acknowledge humanity as equals. However the human king seeing these devices as a chance to enslave the jinn betrayed Daiuk and instead imprisoned the jinn leaders at a peace summit.

Without the jinn leaders, the jinn were banished from the human realm and forced to scatter to the winds. These leaders were imprisoned in six bottles that would be passed throughout the ages in the human world as vessels of power.

During the Kabrani invasion of Earth, a band of heroes and jinn sought out the remaining bottles to free the jinn so that they may possess the power to reclaim Earth. Eventually the jinn are freed despite the attempts by the Kabrani and the aliens were quickly defeated by the ancient race. After the battle Jabal called it a new era of peace between man and jinn.

Though immortal and possessing power over their neighbors, the jinn loved the pleasures humans had to offer. Due to mystical powers and longevity many jinn saw themselves as the superior race, seeing their human neighbors as a lesser species and sport. They are a warrior race as well, honor being a mantle that must be uphold, though this is a standard that a contemporary jinn holds in value.

Retrieved from "https://aliens.fandom.com/wiki/Jinn_(Jinnrise)?oldid=138099"
Community content is available under CC-BY-SA unless otherwise noted.