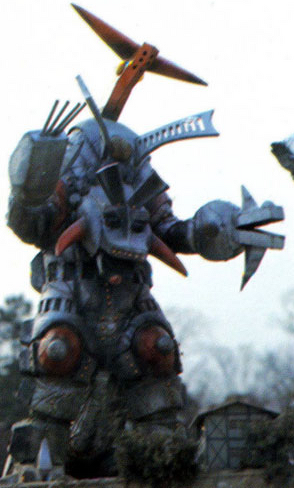 Jikiro was a robotic monster - created by the Garoga - that appeared on Earth on three separate occasions (twice as Jikiro and once as Super Jikiro) and battled Zone Fighter and his family; the Garogas intending to wipe out the Zone family and conquer Earth.

It's assumed the Garogas had more than one Jikiro, as he was destroyed on all three encounters. Jikiro's powers included shooting an electrical beam from his mouth, firing a concentrated array of blasts from the Gatling gun on his right hand and using his right claw as a powerful magnet.

As Super Jikiro, he was better at close combat than his predecessor and had the added ability of Anti-Missile Might technology - allowing it to capture the missiles Zone Fighter fired with its magnet (without them exploding) and then fire them out of its own cannon.

Following the failure of the monster Red Spark to deal with Zone Fighter, the Garogas launched a terror-beast missile containing the robotic monster Jikiro - deploying the monster against the already weakened Zone Fighter.

Jikiro quickly proved its effectiveness as it attacked Zone Fighter with an electrical beam from its mouth as well as bringing the alien hero to his mercy using the magnetic claw on its left hand. Pushing Zone Fighter to his limits, Jikiro then seemed to taunt him as it turned its attention to a passenger plane flying nearby -

before beginning to drag it magnetically towards his claw to crush it. However, Zone Fighter summoned what little strength he had to knock Jikiro down before catching the plane and gently sent it on its way. However, the meter light on his belt began to flash red - indicating he was very nearly out of power.

Seeing this, his family stepped in to aid him. His grandfather Raita activated his satellite 'Great Raideki' and fired a powerful lightning bolt at Jikiro - the blast managing to destroy the magnet claw on Jikiro's arm - while Zone Angel and Zone Junior boarded Smokey (a miniature aircraft hidden inside a cloud). From Smokey, the two children fired an emergency battery capsule to Zone Fighter. The capsule restored Zone Fighter's power back to its maximum, with the alien hero rising tall once again. Now overpowering Jikiro, Zone Fighter beat the machine back before unleashing his Meteor Missile Might - blasting the machine apart and securing the family's first victory over the Garogas.

For the Garoga, they would recover the wreckage of Jikiro and, using what they had learned from the battle, repair and upgrade him for the next time he and Zone Fighter would clash.

Retrieved from "https://aliens.fandom.com/wiki/Jikiro?oldid=164276"
Community content is available under CC-BY-SA unless otherwise noted.