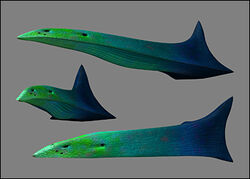 The Jetdarter is one of Darwin IV's most bizarre aerial lifeforms. Jetdarters are small, iridescent scavengers, feeding on the unfinished remains of any creature killed by another predator (such as by a Skewer), and have evolved a compact body that assumes a dart-like shape, hence their name.

Surprisingly for an aerial species, they have no wings whatsoever to aid them in flight. Instead, they possess a biological version of a ramjet engine - complete with a turbine of bone and gristle - which is capable of launching them up to speeds of 64 kilometers per hour (40 miles per hour). When at rest, they use three legs in a tripod arrangement, which otherwise fold up during flight. They have an internal phallus in between their two rear 'legs'.

Jetdarters live in polyhedral nests in the pocket-forests and fear many predators, such as Electrophyte flora and Finned Snappers. They travel in schools, constantly changing their colors in relation to the direction of light.