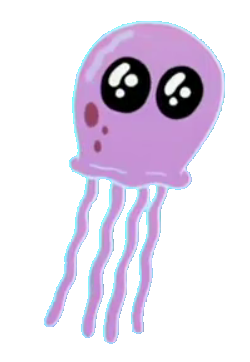 trapping creatures and making clones of them

Jelliens were evil versions of jellyfish that are created from the Evil Alien Jellyfish Overlord after it consumes and traps regular jellyfish.

Jelliens look like regular jellyfish, except they have big, cute, black, shiny round eyes and mouths with sharp teeth, which they use to consume people and make Jellien Clones. They can't sting.

After an anthropomorphic sea sponge named SpongeBob passes by a creepy cave, the Evil Alien Jellyfish Overlord eats a jellyfish and then makes a bunch more Jelliens. One of the Jelliens eats SpongeBob's starfish friend, Patrick and makes a clone of him thus Jellien Patrick is born. All the rest of the Jelliens are then captured by Jellien Patrick (SpongeBob caught one for himself, still thinking it's a regular jellyfish, and thought it was a new breed, because they didn't sting) and they both give out the Jelliens to the citizens of Bikini Bottom.

Afterwards, the Jelliens managed to take over most of the citizens except SpongeBob and Sandy who both learn that the Jellien's weakness is mayonnaise. They then fought through the Jellien army using mayonnaise and eventually took down the Overlord. The Jelliens were all destroyed, never to be seen again.

Retrieved from "https://aliens.fandom.com/wiki/Jellien?oldid=184474"
Community content is available under CC-BY-SA unless otherwise noted.