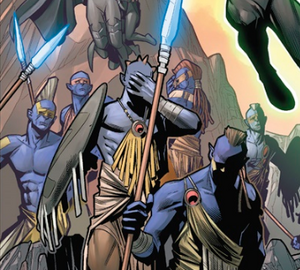 The Jekuul are an alien species from the planet Jekuul in the DC Universe.

The Jekuul are a humanoid purple skinned species. They possess mohawk-like hair.

After Zod retreated from Earth, he and his family conquered Jekuul. Zod used the natives build their world into a new Krypton.

Green Lantern Hal Jordanand Kyle Rayner discovered the existence of the planet during an investigative mission. Hal and Kyle attempted to apprehend Zod but they are overwhelmed by him and his wife Ursa. Even after Hal and Rayner escaped and called for reinforcements the Jekuul sided with the Zods, believing them to be gods.

The Jekuul are a primitive people, near the Paleolithic era. There language is undecipherable as their world has yet to be catalouge by even the Green Lantern Corp. They have been so thoroughly enslaved by House of Zod that the aliens worship the aliens as gods. Through the Zods they were given spear armed with sunstone tips that are able to pierce through constructs created by Green Lantern Rings.

Retrieved from "https://aliens.fandom.com/wiki/Jekuul?oldid=176275"
Community content is available under CC-BY-SA unless otherwise noted.