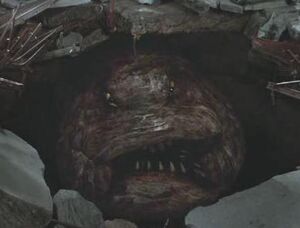 Jeff is a 200 meters long, worm-like alien living in abandoned subway lines on New York City. The name of his species has never been revealed.

Jeff is most likely lithotrophic as it has been mentioned that he eats inorganic garbage and he was seen biting off half of a subway train. He has an elongated body with no visible appendages; a large, four-mandibled mouth filled with thousands of sharp teeth; a pair of small eyes and a short, flower-mimicking antenna.

Jeff is one of the many extraterrestrials whose existence is kept in secret by the Men in Black. Zed mentioned that he remembers when Jeff was as small as a regular Earth worm, implying that Jeff may have been born on Earth, or lived on it for most of his life.

Retrieved from "https://aliens.fandom.com/wiki/Jeff_(Men_in_Black)?oldid=180403"
Community content is available under CC-BY-SA unless otherwise noted.