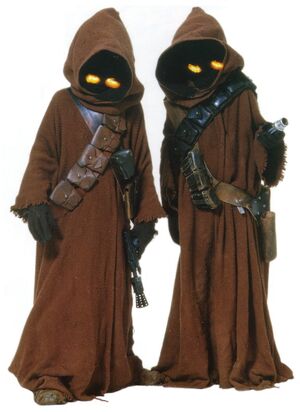 Jawas are a race of desert-dwelling rodents well-known for the shrewd business sense. They are often seen as scavengers and are generally looked down upon by many other species. Their main diet consists of Hubba Gourds.

Jawas are mouse-like creatures from the desert world known as Tatooine, and stand approximately 4'3" (1.3 meters) tall on average. Their actual appearance is rarely seen, as they cover themselves in red or brown robes. They have glowing, almost "cute" eyes, which are yellow in color and egg-shaped. As they wear cloaked robes, most Jawas' faces are not visible except for the eyes. In some sources, they have been described as filthy creatures; they are constantly hounded by swarms of flies and their homes smell awful.

The Tusken Raiders are related to them because they are both descendants of the Kumumgah, a species that was wiped out by the Rakata, so some evolved to be small and some became tall, giving birth to the Jawa and Tusken Raider respectively.

Retrieved from "https://aliens.fandom.com/wiki/Jawa?oldid=184146"
Community content is available under CC-BY-SA unless otherwise noted.