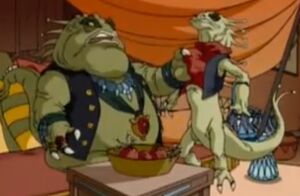 Javkor's Species are an unnamed race of sapient reptilian bipeds which are known to operate on Earth as weapons smugglers. They're known to make dealings with Terminians and hire Pzims to act as assistants and mercenaries.

They're Human-sized lizard-like bipeds with proportionally short limbs, clawed tridactyl hands, green skin, long tails bifurcated at the tip, and yellow eyes. Their most notable feature, however, is their extraordinarily-long prehensile tongue, which they can use to hang from branches and similar structures, supporting their full body weight without problem. The tongue can also be used to smash electronic equipment such as security cameras.

Retrieved from "https://aliens.fandom.com/wiki/Javkor%27s_Species?oldid=180402"
Community content is available under CC-BY-SA unless otherwise noted.