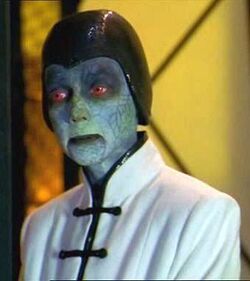 Unknown, but more than 22 years

Jakenchs are a sapient race of reptilian humanoids, some of which are employed as servants by the Sebacean royalty of the Breakaway Colonies, in the so-called Uncharted Territories.

Jakenchs are a humanoid race covered in scaly greenish-blue skin and have red irises. They appear to stand slightly shorter than the average humanoid.

Jakench society is ruled by an Elders Council and frowns upon the acquisition of things. According to a member of this species, they live to serve, not to possess.

Retrieved from "https://aliens.fandom.com/wiki/Jakench?oldid=168880"
Community content is available under CC-BY-SA unless otherwise noted.