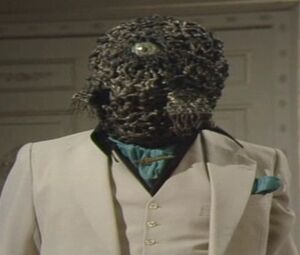 Doctor Who
The Jagaroths were a sapient humanoid species of cyclopean creatures which went extinct after a devastating war amongst themselves. They were both vicious and technologically advanced, to the point of being a threat to the universe at large. Even the Doctor once commented on the Jagaroth's extinction that "the universe won't miss them".

Their physical appearance is humanoid, about the size of a Human being, with green moss-like skin, a single eye and no visible mouth, although they do have a couple of flaps hanging on their faces which might serve as mouthpieces and/or sensory organs. They seem to require similar environment conditions as those found on Earth, although they found that the Earth of the distant past was inhabitable, but not ideal.

At some point in the ancient past, the Jagaroth civilization destroyed itself in war, with the few survivors fleeing to colonize a new planet. They arrived on Earth in ancient times, when life hadn't yet formed on its surface, but the pre-biological molecules were in the process of forming in the primordial soups, just waiting for an energy discharge to ignite them. Due to mechanical damage the Jagaroth ship exploded on Earth's atmosphere, providing the necessary radiation to begin the process, and thus was the beginning of life on the primitive planet.

One of the Jagaroths, called Scaroth, wasn't killed at the crash, but instead was thrown into a rip in the time vortex. This accident somehow caused Scaroth to be divided in twelve "fragments" of himself, all telepathically linked and scattered through different epochs of the planet's future. These different versions of Scaroth, all disguised as Humans, helped push forward the technological development of humanity, to the point where the Scaroth trapped in the 20th century would have access to the technology needed to create a machine that could recombine his twelve selves, and travel back in time to prevent the destruction of his ship. Also, thanks to a clever scheme in which his 16th century self forced Leonardo da Vinci into painting seven genuine versions of the Mona Lisa and hide them so that his future self would be able to sell each to a different collector; he also guaranteed the money to buy such technology.

Seeing that Scaroth's experiments with time were causing disturbs in the time fabric, the Doctor and Romana eventually found out about the plan. As Scaroth's intentions would rewrite history, eliminating all life on Earth in the process, they followed him back in time to stop him, aided by a Human detective named Duggan, who managed to knock out Scaroth. Meanwhile his earlier version was unable to prevent the ship's explosion and was scattered across time as a result; forming a stable time loop and completing the cycle.

Retrieved from "https://aliens.fandom.com/wiki/Jagaroth?oldid=197443"
Community content is available under CC-BY-SA unless otherwise noted.